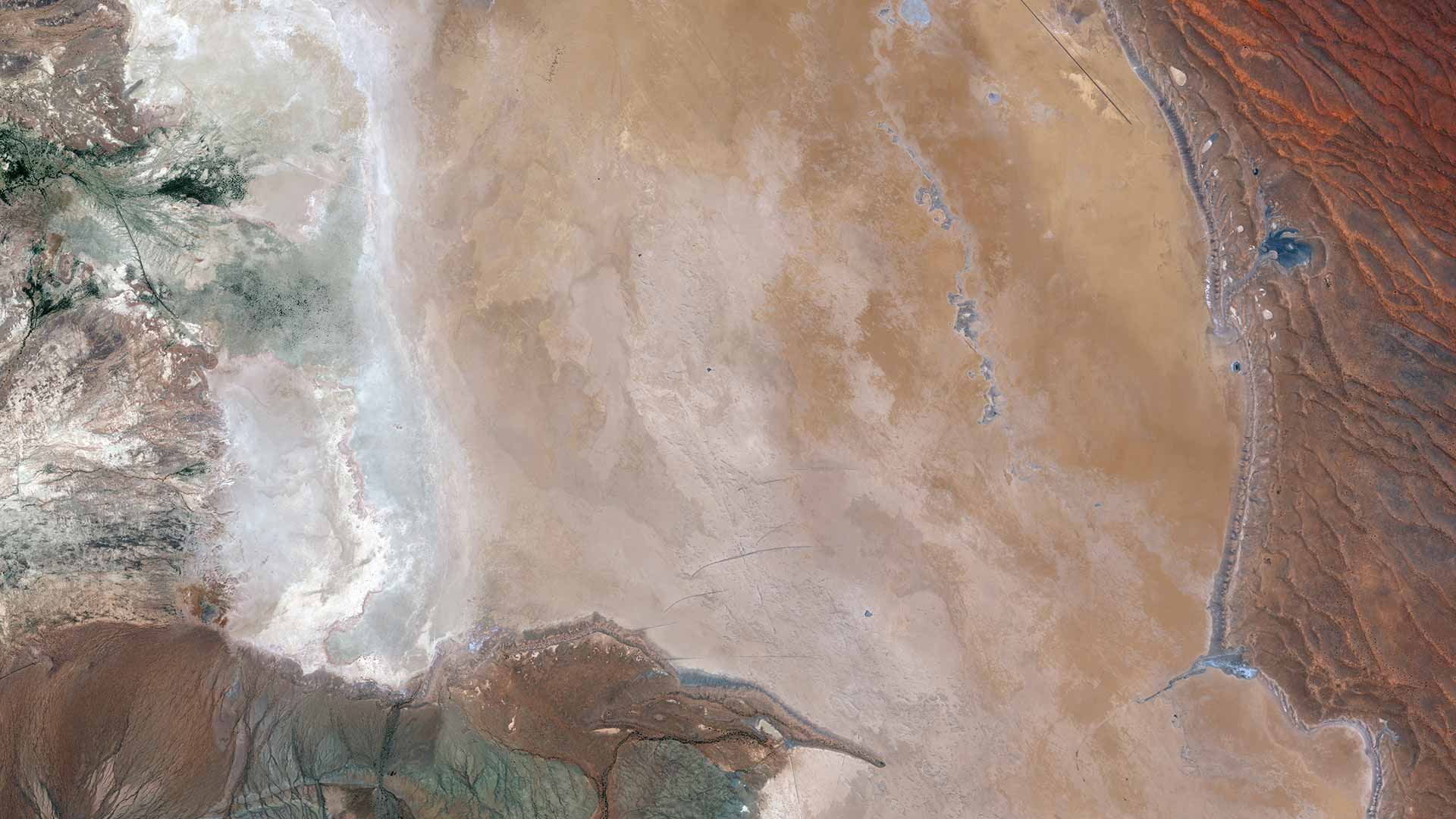 Space Scout: A Site for Speed

Selecting and preparing the site where the Bloodhound supersonic car (SSC), hopefully the world’s first car to reach a speed of 1,000 miles per hour (1,609 kilometers per hour), is a painstakingly complex task. The driving environment must meet stringent specifications of smoothness and space and must be meticulously prepared, removing every potential obstacle down to the smallest stone. Satellite imagery is playing an integral role in this long and arduous process.

The journey to achieve record land speed dates back to 1935 when Sir Malcolm Campbell became the first to exceed 300 mph on Utah’s Bonneville salt flats. Nevada’s Black Rock desert, ideal for its fine dry mud surface, became the site of subsequent accomplishments with the THRUST project achieving a record speed of 663 mph in 1983 and another record 763 mph in 1997. The British-based Bloodhound Project, an international education initiative launched in 2008, represents the latest effort to smash world land speed records.

“A natural choice would have been the Black Rock Desert, but a lack of rain over the past decade and increasingly heavy use has left its once pristine surface in poor condition,” explains Tony Parraman, Bloodhound SSC’s head of sponsor liaison. “We underwent a lengthy process considering sites around the world that met our list of stringent requirements.”

Scouring the world for the ideal venue

With Black Rock out of the equation the global search was underway. The site had to be perfectly flat and smooth, cover a minimum of 12 miles by three miles (20 km by five km), have a reliable surface dry-out period, road access, and be in a region with adequate levels of security.

“The search led us to Hakskeen Pan, a dried out lake bed in the Northern Cape of South Africa,” Parraman says. “We used a number of technologies to narrow down potential candidates, particularly data from the Shuttle Radar Topography Mission acquired in 2000. Once the site was chosen, satellite imagery began to play a significant role in the complex site preparation effort.”

With the selection of Hakskeen Pan complete, a multi-year effort to clean, prepare the site and build the track began. A team of 300 people was deployed to clear 6,000 tons of stones by hand from the 12 mile (20 km) track, one of the world’s largest land clearing projects. DigitalGlobe imagery, provided through European Space Imaging, helped the team precisely plan where the desert track would run and identify the best locations for the massive infrastructure required to support the project.

“The imagery tremendously helped us execute the clearance project and identify where to position the track to optimize its length,” Parraman says. “But these are just the beginning phases of the project. By the time the team deploys to the site, satellite imagery will be used extensively in the complex planning and construction process. It will also play a key role in press briefings and education efforts in more than 5,500 schools across the UK and many more internationally.”

The Bloodhound team is relying on DigitalGlobe imagery for the logistical planning required to accommodate thousands of visitors, construction of technology centers and viewing stands, building access roads, and putting in place evacuation plans in case of desert flooding. In addition, DigitalGlobe imagery is used daily in Bloodhound’s Bristol-based headquarters, providing staffers a realistic view of Hakskeen Pan as construction progresses and decisions made.

The logistical and technical challenges we face are tremendous. From an infrastructure standpoint satellite imagery is used to determine the placement of our entire base of operations. And as the program progresses to the test run stage, before and after images will reveal the effects test runs have on the desert surface and ensure that the track is returned to pristine condition.

Meet the logistical challenges associated with preparing the site, building the infrastructure and monitoring track conditions to support the Bloodhound Project in its pursuit to reach a 1,000 mph land speed record.

DigitalGlobe high-resolution satellite imagery, helped the Bristol, UK based team identify the optimal location of the desert track as well as pinpoint ideal locations for the supporting infrastructure.

VHR imagery will play an increasingly important role as construction continues and provide the ability to monitor before and after effects on track conditions when test runs begin in 2015.

First announced in 2008, the Bloodhound Project is an international initiative focused around a 1,000 mph (1,609 kmh) world land speed record attempt. The project is first and foremost an education initiative designed to inspire future generations to take up careers in science, technology, engineering and mathematics by showcasing these subjects in the most exciting way possible.