IKONOS outlived many of its younger siblings but today it is time to say goodbye.

After 15-plus years of successful service, DigitalGlobe made the decision to end the IKONOS mission. IKONOS was the world’s first sub-meter commercial earth imaging satellite, kick-starting what would become a multi-billion dollar industry for high resolution satellite imagery and geospatial products and services.

Built and launched by Lockheed Martin, IKONOS exceeded its initial life expectancy by nearly three times, collecting 599,754 images that contributed 408 million sq. km.—more than 8 times the surface of the globe—to the DigitalGlobe ImageLibrary. IKONOS archive imagery, dating back to 1999, provides the longest historical record of high resolution commercial satellite imagery and has greatly contributed to the understanding of our changing planet.

We remember IKONOS through some of its best shots… images that helped us change our view of the world.

Impact: What customers can expect

We expect to inform our customers before Q3 2015 how IKONOS archive imagery can be ordered from this new platform. Until then, the IKONOS imagery archive will be unavailable for search, production or delivery. European Space Imaging thanks all our customers that used IKONOS imagery over the course of the mission and recognizes that this also helped launch our multi-billion dollar industry.

IKONOS new collection operations have already ended, and after March 31 the IKONOS imagery archive will be unavailable until the systems have been migrated. Any customer anticipating a need for any IKONOS imagery in the short term must submit an order prior to March 31 or wait until the migration is complete to order or receive IKONOS imagery. While the IKONOS archive migration is underway, our archive from all other sensors (QuickBird, WorldView-1, GeoEye-1, WorldView-2, and WorldView-3) will be available to meet customers’ imagery needs. 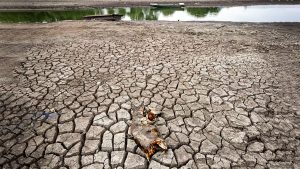 According to the report “Drought in Europe” released in July 2022 by the European Commission Joint Research Centre (JRC) Global Drought Observatory, a staggering portion