PAX and its local partner PEL – Civil Waves have investigated the years-long impact of oil pollution in northeast Syria using Very High Resolution (VHR) satellite imagery obtained from European Space Imaging and data from other sources, in combination with environmental investigative techniques, open-source information and interviews with residents affected by the oil contamination. The research project was conducted in March to June 2020 and highlights the serious health and environmental implications for the thousands of Syrian families spread across hundreds of communities living along the contaminated riverbeds and the effect it has on agricultural lands, drinking water sources and livestock.

Recent leaks in oil pipelines from the Rmeilan oil fields, under the control of the Kurdish-led Syrian Democratic Forces (SDF), has resulted in renewed pollution. Crude oil and oil waste have been transferred to the surface water, flowing through creeks and rivers in this region in the direction of Hasakah city and ultimately ending up in the Jaghjagh and Al-Khabour rivers.

Recent remote sensing research indicates that these rivers face severe environmental pollution from dumped industrial and household waste and wastewater from agricultural practices, including pesticides. Close to a hundred tiny villages and towns are located along the river beds and rely on the water source both for human consumption and for agricultural practices.

Whilst oil pollution is one of the dominating factors affecting the health and everyday lives of Syrian civilians, for the local authorities of the Autonomous Administration of North and East Syria, dominated by the Kurdish Democratic Union Party (PYD), oil is relied upon to keep the region afloat. The oil fields under their control in Rmeilan are continually pumping up heavy, sulphur-rich crude oil, albeit at a slower rate than before the conflict, at approximately 15-20,000 barrels a day. However, the Syrian war left a heavy toll on the capacity to store and refine the oil, with damaged storage tanks, crumbling pipelines and makeshift refineries spitting up flames and fumes over the green fields. 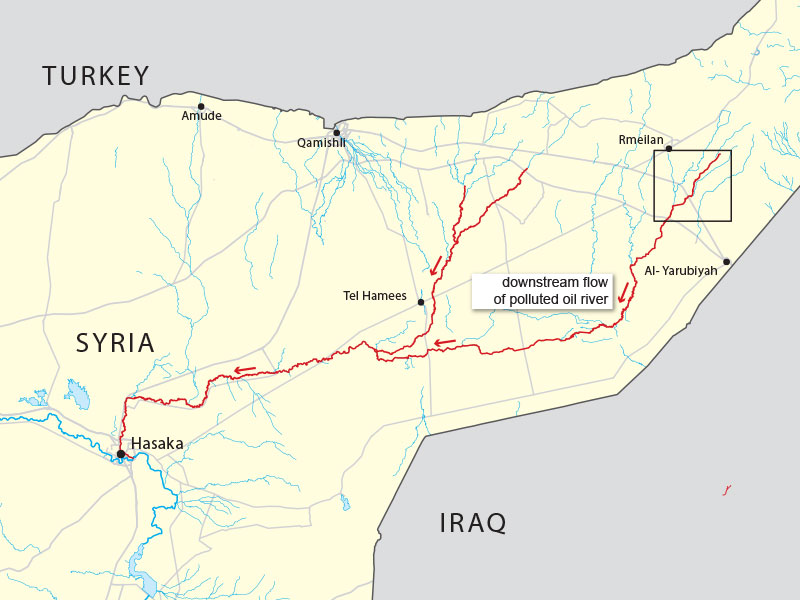 A History of Pollution

Approximately 15km southwest of Derik (locally Al-Malikiya), Gir Zero Oil Facility previously owned by the Syrian Petroleum Company collects crude oil coming from the Suwaydiyah (also known as the Jazeera or Rmeilan) oil field. According to experts from the independently renowned oil tracking website TankerTrackers.com, this facility can usually store up to 2.4 million barrels of oil. However, the picture on the ground tells a very different story. Early after the outbreak of conflict in 2011, the Kurdish-led PYD acquired most of the area from the Syrian regime and later established the Autonomous Administration.

Satellite imagery obtained in 2013 identified that the facility struggled with containing oil waste during the summer. Open-air reservoirs were expanding on the perimeter in July and August 2013 and soon after began to leak turning significant parts of the facility grounds black with oil waste. To combat this, a canal connecting to the local river was dug to function as a valve to release the pressure from on-site spills. The result of this event led to oil waste and crude ending up in the small creek at the west side of the facility. 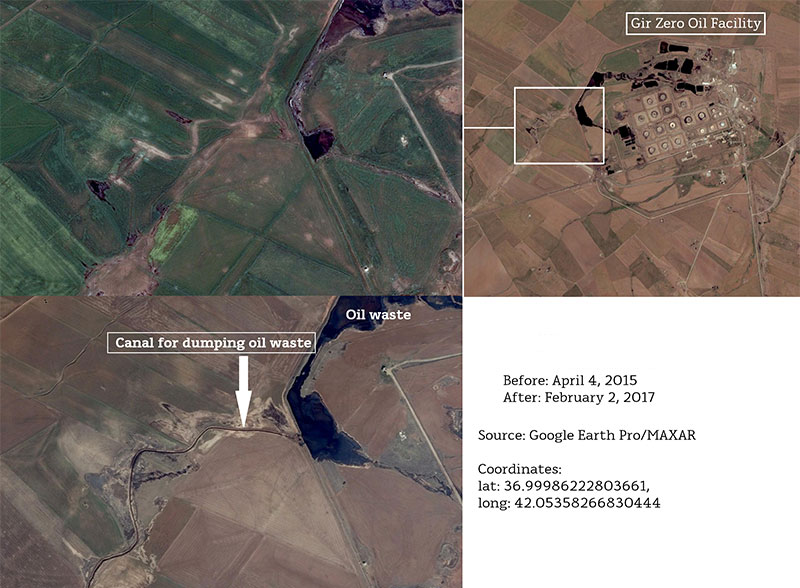 Since the outbreak of the conflict, concerns over river pollution from solid waste and oil have been a recurring problem in humanitarian response planning and have been extensively documents by local media. Citizens living in Tal Hamis, approximately 70km downstream from Gir Zero, raised concerns regarding oil from this facility, as well as other facilities near Qamishli, flowing into rivers and the local environment. Large clusters of makeshift refiners north of Tal Hamis are still operational today and are to blame for dumping oil waste into nearby rivers, causing downstream water pollution. In November 2018, PAX visited these clusters to verify the ongoing issues with lack of proper waste management. Based on remote sensing analysis, it was determined that there are over 300 makeshift refineries operational.

In March 2020, an apparent explosion in a corroded pipeline system resulted in a significant oil spill into nearby rivers, contaminating agricultural land over a wide area and flowing into the nearby village of Kharab Abu Ghalib. Very High Resolution satellite imagery was obtained from European Space Imaging and analysed to determine the extent of the damage. From the imagery, the total area of 18,000 m2 was calculated as having been affected by the oil spill. Contamination from this event continues to impose health hazards to the surrounding communities and extensive clean-up is required to prevent long term environmental damage. 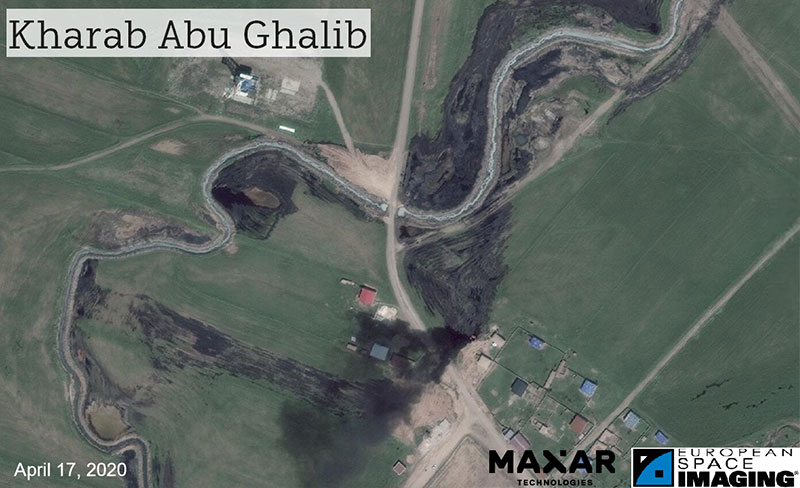 The ongoing conflict-driven oil pollution combined with weakened environmental governance in northeast Syria has the power to adversely impact the health and livelihoods within this energy-rich land. Dependency, infrastructural neglect and an economic blockade have led to debilitating conflict pollution in communities that are unlikely to see any relief or assistance in the near future. Even after much of the fighting has relented in this part of Syria, civilians still face toxic violence of a different kind. Due to the nature of the conflict and resulting oil pollution, the UN is limited in its ability to address the problems within this area. This responsibility falls to actors or donors to identify and address these issues in collaboration with relevant local authorities and/or international and local NGO’s. Assessing and mapping environmental impacts from pollution and can be significantly aided with the use of Very High Resolution satellite imagery provided by European Space imaging.

Read the original report published by Pax for Peace

PAX means peace. PAX brings together people who have the courage to stand for peace. Together with people in conflict areas and concerned citizens worldwide, PAX works to build just and peaceful societies across the globe. PAX works on the basis of two central values of peace in conflict areas: human dignity and solidarity with peace activists and victims of war violence. Their central values lead to a distinct vision of peace and security. In their peace work, they are guided by the concept of human security; the protection and security of civilians leads their responses to conflicts. For more information, visit their website.

PEL – Civil Waves seeks to achieve a Syrian society that enjoys living in a climate supportive of civil peace and social cohesion, flourishing the sustainable development of its institutions in light of the principles of democracy, pluralism and public freedoms. It was established to activate the role of different societal groups (youth and women in particular) in political, social and economic life and to launch initiatives and projects that seek to consolidate coexistence and peace and provide an appropriate climate to activate civil life in society. For more information, visit their website.