The power of VHR data lies in the detail. It can provide empirical answers to questions concerning multiple humanitarian and border security applications. Due to the resolution of the imagery, tents and cars can easily be identified from the sky, allowing the movement of refugees to be monitored in addition to the mapping of displaced populations.

The technology also provides more measured border security controls, both at a domestic and international level. Borders run across long distances of varying terrain and people are small. However, through the aid of satellite technology, policy maker’s knowledge of the entire border and not just certain zones, can be significantly increased. The wide reach of the technology also means that no area of the land or sea is unable to be captured. As a result, countries can reduce the number of illegal immigrants entering, reduce the death toll of human lives attempting to cross in dangerous areas and increase internal security within the country by preventing cross-border crime.

A small piece of land on the Mediterranean Sea, bound by Morocco on all sides, Melilla is one of just two Spanish enclaves that sits in Africa and is one of Europe’s most fortified borders. The small city of 86,000 residents has been in the possession of Spain since the late 15th century and poses a sliver of hope for migrants hoping to escape desperate circumstances. Thousands flood the fences every year in hopes of eluding the small force of patrol officers.

By day, you might feel like you’re in any other Spanish town; eating Gazpacho by the beach while a guitar strums gently in the background. However, at night hordes of migrants, rush the border fences in hopes of setting foot on European soil.

Making the arduous journey north to seek refuge, the immigrants gather in the hills outside of Melilla. Some are fleeing violent conflict while others poverty and starvation, but almost all of them hail from Sub-Saharan Africa. From make-shift camps in the mountains, they plan and gather enough numbers to make the next run.

These camps are not always a safe and hygienic place for fleeing families. Analysing Very High Resolution images helps officials locate camps and movements of people near borders, which can lead to saving lives.

For those attempting to cross, it’s a numbers game. If many of them rush, then surely a few will make it. However, this is no game. At the height of the crossings in 2014, hundreds would make the mad dash at a time. Many were injured and dozens died that year.

The runners face a tough climb over several defenses and must avoid both Moroccan and Spanish border control agents. The few that make it past these obstacles have a chance at receiving special privileges once on European territory. For that, these families risk everything. 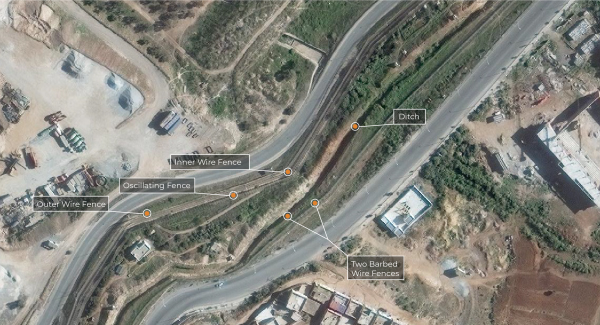 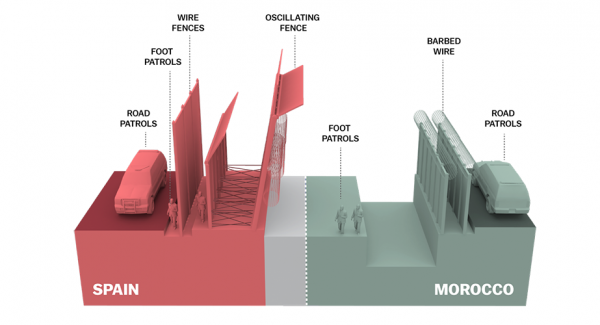 While the border between Melilla and Morocco is only about 11 km long, it takes a tremendous amount of effort and resources to monitor and control. The European Union, reportedly, puts pressure on Moroccan officials to contribute heavily to toward controlling migration at the Melillan border. In recent years they’ve built new fences and routinely disrupt the camps. However, due to limited resources, potential border crossers are rarely deported out of Morocco. Instead, they are scattered around the country and left to regroup and try again.

Satellite imagery is used by government agencies and human rights activists to monitor sensitive border situations all over Europe.

“During the last year, we are facing a technoscientific transition from barbed wire and the border guard to satellite images.”

Whether it’s a need for Very-High-Resolution (VHR) imagery to assess the smallest of vehicle and personnel movements or Near-Real-Time delivery to monitor rapidly changing situations along high traffic border crossings, data supplied by European Space Imaging is a crucial tool in safeguarding European Borders.

To find our more about using satellites to remotely monitor borders, see our article, “Watching the Gaps”.